“The word ‘ivory’ rang through the air, was whispered, was sighed. you would think they were praying to it. A taint of imbecile rapacity blew through it all, like a whiff from some corpse.” — Joseph Conrad, Heart of Darkness 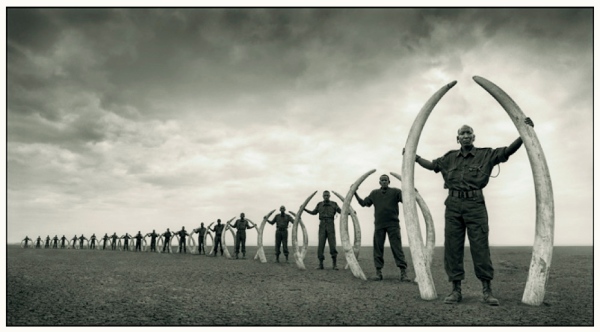 After reading one article on the Daily Mail I started to do some digging and snooping around, and wow-boom. The demand is out of control and if not stopped the elephant may go the way of the American Bison-only worse.

Having been to China I know firsthand that the Chinese are marvelous people but they also have a very different culture and their opinions on animals and what animals do for them is very much different than ours(here in the U.S.)

It is very disheartening to see these beautiful animals destroyed for their tusks to create inanimate objects, it is very hard to wrap ones head around that type of desire and need. No matter the cultural differences.

The Chinese are moving more and more into a consumerism society, no disputing this fact. More wealthy people who have a desire to spend that money and show off the spoils of their work, but does it have to be an object made from ivory?

I fervently hope that this newer generation of wealthy will put their eye on a different sort of prize, or will the strong culture and appetite for ivory continue until there is no new market ivory to be had?

To me this is a very difficult question, and no easy answer(s). If one is hungry and need the for money is that great, how do you stop those actions?

Poachers=Greed, an example of the ruthlessness are Kenyan poachers where the stakes are high for elephants, and humans, this video of dead elephants may be tough to watch for small children:

On one hand we have a market with a very different culture and a very different outlook on the expectations of humans concerning animal species. The other, a network of poachers who are trying to fulfill market demand and make a living. If China stops the import of ivory will this slow down the poachers and the desire for money-or greed. I don’t know.

This video is from ABC Australia, the fight in Kenya and the Chinese involvement:

Hong Kong customs officials have seized at least 16 tonnes of ivory worth HK$87million (more than 7million pounds) bound for China in the past five years-which would require the tusks of 1,800 elephants, the paper reported

“It’s either China does something, or we lose the elephants. It’s that big,” Poole said. “If we can’t even save the elephants – such an iconic keystone animal, important to the African habitat – then what hope do we have?”

Nearly 40,000 elephants are slaughtered – using everything from spears to automatic weapons – every year for the illegal trade in tusks, said Poole. And with about 400,000 elephants left in the world today, most of them will be gone in 10 years if the poaching continues at this rate, said Poole, who has spent over 40 years researching the animals.

This is the most powerful and well known movie/video out there. It runs 45 minutes and is of great interest to anyone who is concerned about the slaughter of the African Elephant. It’s moving and disturbing, if you weren’t angry before-you will be now. — “chopsticks”

“Elephants are living treasures. Nature’s gardeners. Nature’s great teachers. Tragically some people don’t give a damn. They prefer the dead treasure to the living one. The ivory. We must challenge this so-called ‘trade’ with all our might and shame on those who would condone it.”

Statement from the International Fund for Animal Welfare and the fight to save the Elephant:

Elephants are being killed for ivory. While elephants have some protection through the United Nations Convention on International Trade in Endangered Species (CITES), several African nations regularly request that CITES Conference of the Parties allow further sales of ivory from existing stockpiles.

IFAW urges decision makers, politicians and consumers to oppose all ivory trade while elephants are still being killed for their tusks.  But ending the ivory trade requires more than legal treaties.

We provide training and equipment to rangers to protect elephants from poaching and to customs officers to identify and arrest wildlife smugglers. We have investigated illegal ivory trade in marketplaces around the world and the increasing use of the Internet in ivory trafficking  We mobilise our supporters to demand politicians stop the ivory trade and support elephant protection efforts. 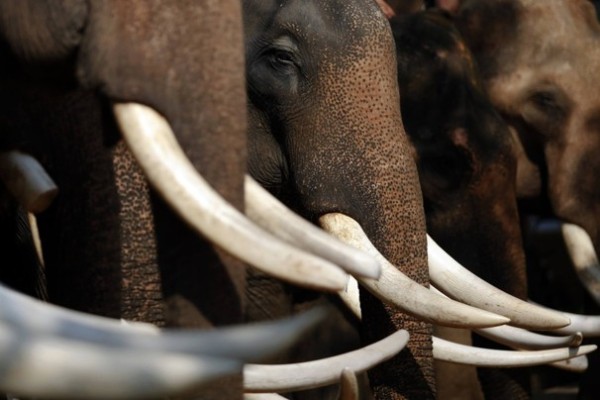 Vanity Fair has a powerful and in-depth article(Agony and Ivory) about the continued slaughter of the African Elephant and the human story, some very sad statistics—

Unfortunately, this problem isn’t limited to just Kenya. Across the continent, in their 37 range states, from Mali to South Africa, Ethiopia to Gabon, elephants are being killed, some believe, at the rate of around 100 a day, 36,500 a year. But like so many things in Africa, it is impossible to know how many elephants there really are (estimates run from 400,000 to 650,000), how many are being slaughtered for their tusks (figures range from “more than 4,000” to “as many as 60,000” a year), or how much ivory is being smuggled to Asia (over the last 10 years, an annual average of roughly 45,000 pounds has been seized in Asia or en route). But the International Fund for Animal Welfare (IFAW) believes roughly 100 elephants are being killed each day, and this lines up with two of the most plausible estimates.

What those close to the situation are saying;

“A single word can send out the wrong signal for those in the illegal trade, that they can start killing as quickly as possible.”  -Perez Olindo Government of South Sudan

“It isn’t only our elephants that are being killed. Our dedicated rangers in the field are losing their lives while trying to protect elephants from organised, well-armed and ruthless criminal gangs. The death of these unsung heroes must not be in vain.”  -Patrick Omondi Senior Assistant Director, Kenya Wildlife Service

“Seized ivory stocks around Africa are recycled back into illegal trade due to corruption. Ivory stocks should be burnt together with the hopes of traffickers for any “legal” way to allow them to slaughter our elephants.”  -Ofir Drori Director, Last Great Ape Organisation (LAGA)

“Elephants need a creative mix of international response attacking the ivory trade and local, on-the-ground reduction of the corrupt mafias which siphon off Africa’s biological riches. There are alternatives out there, but the greed of few comes at the expense of many, including both local people and biodiversity.”   -Naftali Honig Projet d’appui à l’Application de la Loi sur la Faune sauvage (Project for the Application of Law for Fauna), Republic of Congo

“In 1970 my country was home to 70,000 elephants. Today as a result of poaching, and primarily significant transboundary poaching, the wildlife law enforcement officers are fighting to protect less than 200 individual survivors. We are really in a situation of crisis and I appeal to the international community to support the range States and protect this charismatic animal.”   -Jean-Baptiste Mamang-Kanga Director of Fauna and Protected Areas, Central African Republic

“It is very discouraging having to fight the battle to save elephants once again. The 1989 ban helped elephants to recover in most parts of Africa. Now even in Amboseli we’re losing elephants to ivory poachers for the first time in many years. The sale of any ivory–legal or not–is creating demand. No one needs ivory. It is a beautiful substance, but the only ones who need it are elephants.”   -Cynthia Moss Amboseli Elephant Research Project

Original Daily Mail info via Elephants face extinction if Beijing does not ban ivory trade: China accounts for nearly half of the 40,000 killed every year for their tusks | Mail Online.