These pics were taken a few days ago. I have been called back to this site because the homeowners wanted to add on a few more elements to the backyard 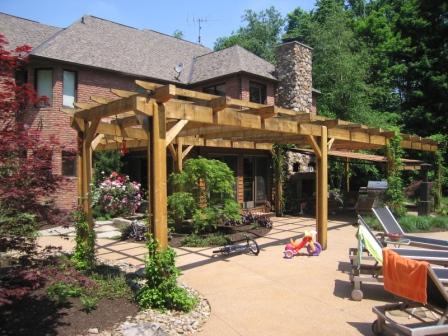 [Looking from the hot tub area to the main gathering space.]

This pergola is the one I discussed in the most visited post on the site. There seems to be a lot of interest in pergola’s out there. Maybe the interest is in trying to figure out what a pergola is.

For the overall goal of this project the main goal was to create several usable spaces. Especially where adults could gather away from the congestion of the pool area. A usable structure to house pool stuff, a hot-tub hidden away, shade area’s, and a way to connect it all together were the other request.

The fireplace(pizza oven included) was built last and has become the most popular area. A awning was added to extend the use of this area later into the season. I’ve been told they even use the space with snow on the ground. 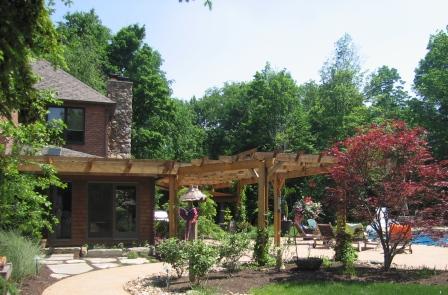 [A look at the pergola from entering on the driveway side.]

I have been asked to add a structure that will house a fire wood storage, kitchen set-up, shower and toilet. This will be designed-in at the far right of the top photo. These features had been discussed initially but it wasn’t felt they were needed at the time.
The stone that you see on the fireplace will be the same used on the building-to carry that theme over into the new construction. I am working on this project right now and will post images of drawings for this design.

If you are a homeowmer who is looking at this site I strongly suggest at how you will use your pool space long-term. There has been a significant change in the way folks now look at their backyard. If you are spending the money for a good indoor pool, large entertaining space, hot-tub/spa, kitchen area’s . . . consider adding the the shower/change/toilet structure to your plans(budget allowing).

I encourage Designer’s to add these elements in to any conceptual designs, it is easier to cut back . . . than to have to add on later. We all know about staging also . . . so design them in prepare for the future of the space.